(CNN)Inside the map room of the White House, a small group of advisers sat around a table and peppered the President with accusations and criticisms about everything from lying to incompetence. The team, led by former New Jersey Gov. Chris Christie, was getting Donald Trump prepared for the onslaught they expect from Joe Biden on the debate stage Tuesday night.

About 100 miles north in Wilmington, Delaware, a similar scene played out with Biden and his team, led by longtime Biden aide and debate expert Ron Klain. Biden’s prep has been more traditional — putting on mock debates with veteran Democratic attorney Bob Bauer playing the role of Trump in at least one session.

For two very different men with polar opposite temperaments and divergent governing philosophies, their debate objectives have some fundamental things in common: Put their opponent on the defense and make it as much a referendum on the other as possible. In conversations with multiple sources familiar with both candidates’ prep, each is practicing ways to get under the other’s skin, while also avoiding blowing up and going off script if the debate turns personal.

Advisers to both candidates are expecting one of the night’s biggest flash points to be about each man’s children.

CNN is told that Trump is preparing to go after Hunter Biden for getting lucrative jobs overseas when his father was vice president that he will say the younger Biden was not qualified for. Trump and his allies have repeatedly made unfounded and false claims to allege that the former vice president and his son acted corruptly in Ukraine.

Their hope is that it knocks Biden off his game — either causing him to blow up or say something incorrect.Biden’s team has been working with him to be ready for Trump to go after his son in a way he hasn’t had to deal with as directly before. Trump advisers have also spent time working with the President to stay calm if Biden retaliates by invoking Trump’s daughter and son-in-law, both White House aides with no previous government experience. A source familiar with Biden’s prep, however, says his plan is to pivot away from this issue, not engage.

Advisers to both are looking at each candidate’s past debate performances to prepare for tonight’s matchup.Watch any of Biden’s debates, it is clear he has some quirks. Since he was told for decades that he talks too much, he often stops mid-sentence when he sees his time is up. Some advisers say that when he is debating someone like Trump, if he’s trying to be polite, it can be perceived as weak — and is something to avoid.”I do think that he will not be polite against somebody who is a terrible bully. I think that he will be strong. I think he will be clear. He should own the stage, right? ‘This character over here, who is a liar and a con man, and has presided over 200,000 deaths, that guy should not be president. I should be, and here is why.’ ” said former Michigan Gov. Jennifer Granholm, who has prepared Biden for multiple debates. Granholm is a CNN contributor. 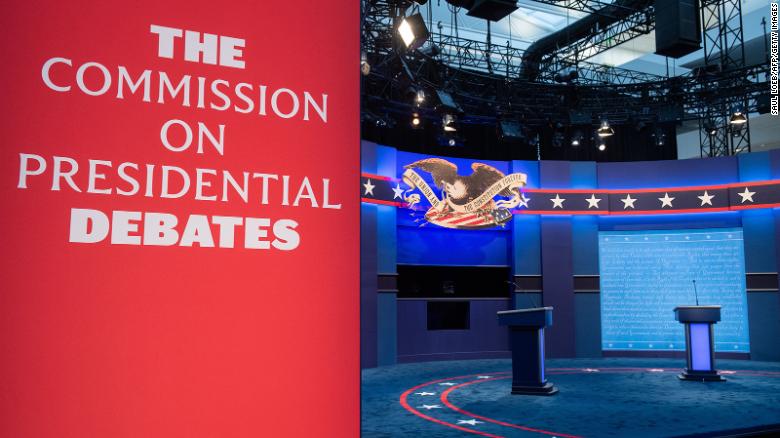 The stage of the first US Presidential debate is seen at Case Western Reserve University and the Cleveland Clinic in Cleveland, Ohio on September 28, 2020. – Tuesday’s clash in Cleveland, Ohio, the first of three 90-minute debates, represents the first time voters will have the chance to see the candidates facing off against one another directly.She, like other Biden allies, warns that spending too much time fact checking the President would be a mistake.”He can start by saying and acknowledging from the outset that Donald Trump is an inveterate liar and he will lie during this debate, but he just can’t be spending all of his time battling Donald Trump’s lies when he’s got to get his message out and talk to the people about what he’s going to do for them. It’s about them, not about Donald Trump,” said Granholm.As for the President, some of his advisers say they hope he reigns in his natural tendency to get too personal.”I would say to avoid becoming overly personal and stick to the issues,” said Trump’s 2016 campaign manager Kellyanne Conway.But, Conway added, “You can question, and I’ve been a loud voice about this, you can question the readiness for the presidency of Joe Biden, his acuity, his agility, his stamina, his just readiness for the job.”Team Trump has been pushing the President to lean into key 2016 promises he kept, like renegotiating NAFTA. They’re also hoping — when the issue of race comes up — he pivots to the bipartisan criminal justice reform bill he signed into law.Conway said the President has been watching videos of Biden’s previous debates and of his own debates against Clinton four years ago.Trump advisers say they believe Biden gets flummoxed when talking about and presented with numbers — so they have been practicing ways for the President to work that into Tuesday night’s debate.

A focus on coronavirus

The incompetence of this administration revolves around Covid. I mean, if he just points out that if we had done what Japan had done, 195,000 of those 200,000 people who are dead would now be alive?” previewed Granholm, adding that she hopes Biden adds what she calls his secret sauce — empathy — to his answers on the issue.Inside Trump’s prep, advisers tell CNN, they have been working to give him tools to beat back Biden’s broadsides on the pandemic.

Like when Biden compares America’s high case count to other countries, sew doubt in others’ numbers.They are also working with Trump to go beyond his go-to points like restricting travel from China.

“I’d love to see the pivot to things that maybe people don’t know as much about, which is the millions and millions of PPE that were provided. The billions of dollars in PPP loans to small businesses,” Conway said.

One of the hardest things to do in preparing any candidate for a political debate is getting him or her used to the fact that an attack is coming.Granholm has been in the room with Biden doing just that multiple times, playing the role of then-Alaska Gov. Sarah Palin, whom Biden debated in 2008, and pretending to be Massachusetts Sen.

Elizabeth Warren during this year’s primary battle.”You have to find the hardest things and go after him again and again and again,” Granholm said.”You’re ready for it, and it’s not going to get you emotional. That’s really important,” she added.

Conway said that despite the fact that people not in the room have a hard time imagining Trump taking the incoming needed to be really prepared, he does understand the importance and “appreciates people firing questions at him.”

“Nobody wants to hear tough questions for the first time on the debate stage in front of hundreds of millions of people. You want to hear them before that among advisers who know you, who understand the issues, who understand politics and policy, and who have witnessed any number of debates over the years,” Conway said.